Zach Prusak, accidentally revealed the release month for season 3 of 13 reasons why

13 Reasons Why has been the most awaited American teen drama web television series developed for Netflix, by Brian Yorkey. The story of the show is based on the 2007 novel 13 Reasons Why by Jay Asher. The series started in 2017 with the first season and later a second season followed in 2018.

And now when the fans were eagerly waiting for the third season without any clue about when it would be aired, Zach Prusak, an actor from the series accidentally revealed the release month of the upcoming season.

Zach Prusak who played the role of a jock (disc jockey) in the show revealed on twitter as well as on Instagram that the show is returning in October this year. He wrote “13 Reasons Why season 3. October 2019! Let’s go !” 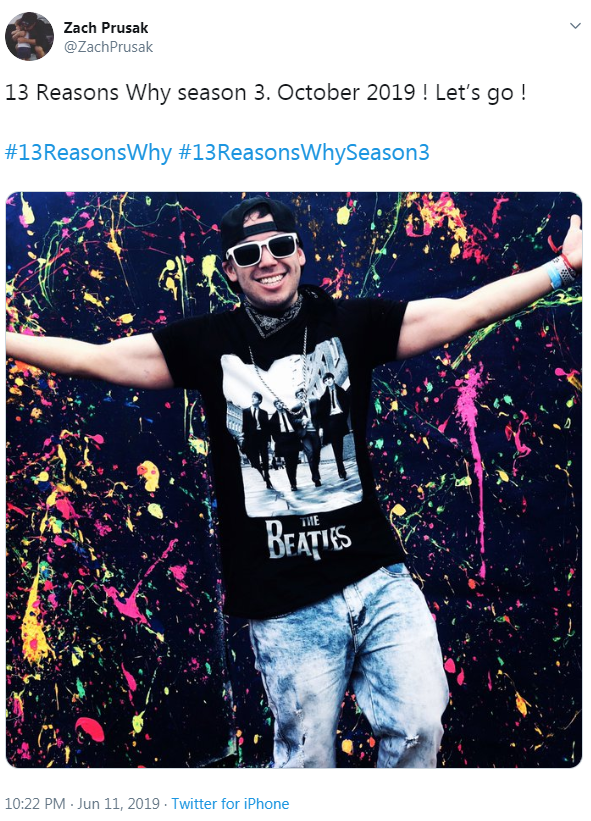 Later, Zach also wrote an explanation under his post on twitter denying the confirmation of the release of the show; he said “I’m a fan of the show and I’m a fan of October, my favorite/birthday month. Separate things. This is casually blowing up for no reason lol.”

He also made a second tweet explaining this situation, and also gave us the reason why he deleted his previous tweet.

To clarify, the show isn’t coming out in October and none of those websites contacted me before writing about #13ReasonsWhy and I.

I tried clarifying a few days ago but it still didn’t get through. So I just deleted the tweet. And hello Reddit. ???

But his explanation is not convincing enough, and now he has deleted his tweet as well.

The final episode of season 2 ended with lots of questions and suspense making the fan desperate for another season. It is not officially confirmed that the season 3 is really coming the next month and till date, no details about the upcoming season have formally been revealed as well. Only a short teaser was released last year in June, and now we can expect an official trailer soon.